This is the 10th release by this very interesting Hungarian group… 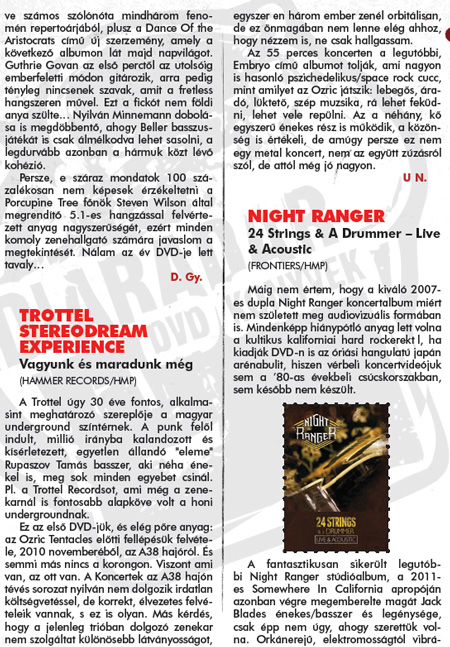 Trottel is more than a band and more than a label: it is a deeply entrenched part of the history of Hungarian independent music. The force behind the band(s) Trottel and the label is Tamas Rupaszov, an extraordinary bassist and music writer whose career has been spent networking the independent music scenes of Europe and Eastern Europe since the mid ’80s.

The first time I saw Trottel was in 1993 in the now redundant U-Club, a music bar in Bratislava. They played with Scottish friends Archbishop Kebab, a riotous punk post-raggletaggle band of the just-post-punk and no-wave era. Amidst the thick smoke, three fascinating figures onstage could be vaguely seen: one draped heavily over a guitar with dreadlocks pouring over his face, one bopping around like a good combo of Flea and Mike Watt on bass, and one drummer barely discernable yet strongly keeping the offrhthmic beats strong. Polyrythmic noise filled the crammed club, psychedelic, heavy, punctuated by passionate bass thumps. Trottel was an intense experience then as they are now: performing now mainly as either the Trottel Monodream or the Trottel Stereodream project, the band has changed around its members but has kept its musical mission very much intact. Touring all of the time, their sound evolves and their popularity grows. The upcoming European tour of Trottel Stereodream brings them to Belgium, Germany and the Netherlands. And here are some words from Tamas himself, about Trottel and music…

Tamizdat: Where are you writing from, and how will the tour be this February? Who will be performing on this tour? What’s new for Trottel Stereodream and what are you excited about?
Tamas: I am sitting next to my Pc. in a cozy warm room in Budapest. Well, on this tour we’ll be playing our last record. So it is in fact the same line up as last year, with Janos Adam our photographer friend from Miskolc (HU) who is making a diaprojection using his own self painted beautiful psychedelic pictures on film. He first toured with us in 99 and since then we always wanted him to join again. Plus we got now Nora on electric violin so the presence of the two violins – the acoustic one and the electric one – is more than exciting. It is our regular February mainly German tour we’ve always done since ’89. I dont know why but we always go on a similar tour in February… and we are always excited about going on tour. On this tour there are some places we haven’t been to in years so I’m curious enough. But I got to tell that it is rather rare that we don’t enjoy a tour. We are sort of touring maniacs most of us.

T: How and when did Trottel (band, then label) start? And what are all of the projects that have developed out of Trottel?
B: The band started in 1985 but the first few years- just like for many east european blocks bands – weren’t too busy. The concert possibilities were very limited, just couple of gigs in Budapest and some in other cities often ending with police trouble and stuff like that. Making a record wasn’t an option either so we put out our home recorded music on self-made tapes and sent them abroad by dozens. We could call this quite romantic except that we had to listen to the same stuff all day because of the duplication. So that’s how we started and also we began to release and distribute illegally other Hungarian underground bands. Me, I had no passport that time so travelling abroad was out of question. So this was my way of communicating with the outside world. Then in 88 we got an offer from a French label to go to record to France / Montpellier / and get our first LP out so when I got my passport back we began touring madly as well. It was ’89. Most of the people who played in Trottel could not cope with the long travelling and stuff so changing the line up became a permanent concept after 90-91 when the original line up broke up. With the line up changing came the fact that the music changed too. It was frustrating at the beginning but with the passing time we realized that this always gave a new dimension to the expression too so the whole thing became a no style experiment. The weird side was that often people who wanted to joint didn’t know what this whole story was about and imagined the life of a regurarly touring band more colorful – or god knows what – then what really the truth is.

With the passing time we opened to very different musical directions. Our Troxx project, the only quitar line up was the most experimental period. We wanted to become a kind of street band playing outside acousticly too but finally that line up broke too after we recorded our Troxxtracks album in 97. So gradually we become some sort of amoeba-like band with several line ups. The problem with this is that the public can’t really follow all these changes and they disconnect at a point when they don’t like the actual stuff. That ‘s why we finally decided to marque difference of sound in the name of the band. After becoming Monodream, now with the arrival of Todd, the black violonist, singer and the visual thing and the electric violin we became The Trottel Stereodream Experience. I think this is the end, it can’t be more complicated than this… The style and how it is called never really interested us after all people’s taste is always different, there are now people for whom we are too folky, for other ones too electronic or the rhythms are too weird. I think our only musical concept is to make interesting music as we like and at the same time to keep our integrity.

The label. So we started to make tapes in 86 and later on the home duplicating became a hell of a job. By making records outside of the country, we got to face the problem that our public in Hungary could not get our records so it was time to make a record company to solve all these problems. Trottel Records was created in 92 with no capital at all and without a serious business aim. The first release was Trottel’s “The Same Story Goes On” lp/cd/mc It had a very good echo so many people in the official press and media started supporting us too. That’s how it could work and in fact that’s how it works nowadays too. We released local and foreign bands too. I am extremely proud of the first releases of Anima, Masfel or Korai Orom from the beginning, Hungarian bands which are still on stage, going on their way quite succesfuly and that we still are in good terms with bands who left the label to try other possibilities. Even if I personally don’t believe in other possibilities! Trottel Records rarely released music without passion, human impact matters a lot and again, just like in our band, the only concept in to do interesting stuff. It isn’t the best way in business terms but the label never wanted to be a huge one but a small good one. Many other Hungarian ones – bands and labels -which started also at the beginning of the 90’s stopped because of the lack of financial succes. Trottel Records is still going because the financial succes never was the prime issue.

T: What would you say about the current times in music? (in general? in Hungarian independent music?) Have you felt a difference in the type of audience who are your fans over the years?
B: It is sad to see that many bands sacrifice artistic concept just because they think if they do they’ll have more success. Tons of artists are sitting at home and getting depressed about how could they became popular. This deforms the music I think . Swinging on the edge between the mainstream and the underground produces sometimes very ugly solutions. At the same time you see bands which keep going on their way, they play tasteful music and they keep some morals too. I think the public mainly follows the trendy stuff which is maybe a logical period in the Eastern countries but I really hope there will be a time when people will appreciate again many different currents, like before. We could say that the public isn’t too open minded nowadays here at the same time I believe it has an economical reason too. The problem is that this mentality kills the music scene. Our audience changed too. Here, the people who are over 25 mostly become slaves of their lifestyle, running after money, struggling for the goods they feel they need to get. The mainstream music business buys the time in the media, media’s influences the young potencial public and the independents can’t compete with this. I don’t really think it should … I think it is important to be clear with yourself about what you want to be as a band or label or else because if you aren’t it leads you to produce tasteless music and horrible things like this… Tamizdat: What new projects do you have as a band, and as a label?
Tamas: Well, I am someone who is always more interested in the future so for me always the next thing is the most important. Some djs from Budapest asked us for remixing things, that’s the most recent idea. I think this will be what we are going to do in the near future. We are also thinking of remaking some very old songs with new technology and going on tour with Ildi our first female singer who left the band in ’91.

T: If you could have the perfect plan for Trottel’s future, what would it be?
B: Well, basically as far as I am concerned I ‘d like to travel a bit more and to be able to go further as well. We got a west-Afrika project since few years, I’d like that to come together, this is naturally a time and money question. It would be good to be able to increase the number of the people in the band but then we could only go to bigger events and that’s not the aim since we want to play everywhere… After all, all I’d like if we could keep doing what we do, solving some financial questions without giving up our integrity… stuff like that…